Sunlight streams through the windows of a meeting room off the main hall of the Woman’s Club of Minneapolis, where two tax experts have come to testify in front of the regular Friday-morning meeting of the Civic Caucus. Coffee duly poured, they’re being peppered with probing, detailed questions about the quality and weight of the tax bills before the state legislature during the 2018 session, and what those bills mean in relation to sweeping legislation recently passed by the U.S. Congress.

Like a band of wise elders, the dozen (mostly) silver-haired interrogators of the Civic Caucus draw from backgrounds in business, academia, nonprofits, and the law; it’s no exaggeration to say there are centuries of public-policy education and expertise at the table. And, notably, although the conversation revolves around fundamentally different viewpoints on government—and how to fill its coffers—the talk is pragmatic and civil, steeped in a tradition of bipartisanship that today seems a lost art. 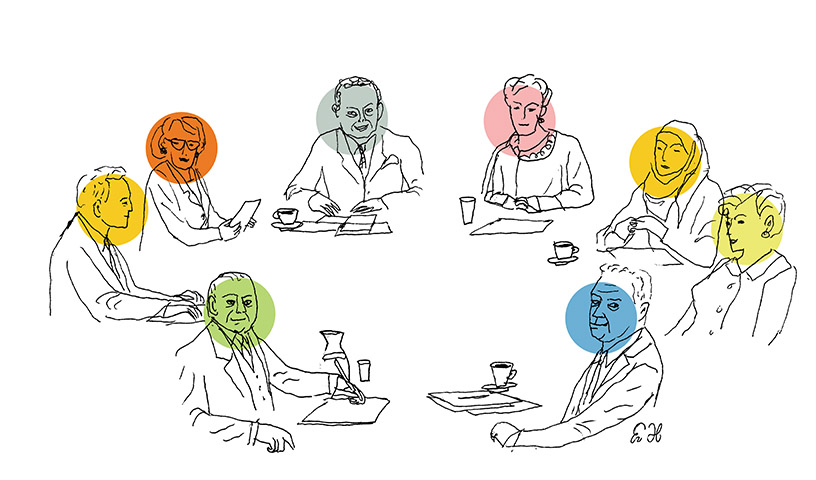 With roots going back to the 1950s, when a group of policy-minded friends met for regular breakfasts to chew on the issues of the day, the Civic Caucus has evolved into something unique amid the hot-take public conversations of the day: a voice dedicated to in-depth dialogue based on the notion that complicated problems merit a measured, sophisticated approach.

“We like to say we’re the Civic Caucus University, with about 500 volunteer professors,” says former Minneapolis City Council member Paul Ostrow, today an assistant county attorney for Anoka County and chair of the Caucus. “We believe strongly that our niche relates to the importance of an educated public, and that those who are in positions to make decisions should have a depth of knowledge that isn’t based on tribe or ideology but on what actually works.”

The Caucus claims former state legislator Verne C. Johnson, who served as the Citizens League executive director from 1957 to 1967, as its founder—and credits his decision in 2002 to focus on expanding the group’s footprint through email and digital delivery as crucial for an undertaking with decidedly analog roots. Today the Caucus reaches a web audience of more than 5,500 people, including officeholders and candidates, as well as self-described policy wonks from the private and public sectors.

“We really are like a council of experience and wisdom,” says Executive Director Janis Clay (who stepped into the role in 2017, succeeding former Citizens League Research Director Paul Gilje). “We see all sides and we talk about all sides. And we own nothing except a Bluetooth conference phone—that’s our brick and mortar.”

“Our sweet spot is being advocates for the marketplace of ideas. Democracy flourishes when good ideas get considered and debated and implemented.”

Former U.S. Senator David Durenberger says the Caucus is based on a pragmatic mindset of decades past. “The people on that mailing list do yearn for the old days, when someone would stand up and be quizzed by people who were willing to have their viewpoints converted,” he says. “A viewpoint then didn’t have to be bought 100 percent by either side, but it almost always set a starting line that had to be crossed to set priorities for the state.”

In times arguably characterized by ideology and purity tests on both sides of the aisle, the Civic Caucus’s DNA is staunchly nonpartisan. You could call it cerebral, rooted in finding an agreement on the technical nature of public challenges, then working from there to discuss a range of approaches.

“It’s problematic that today a lot of the discussion is dumbbell-shaped,” says former Citizens League Executive Director and journalist Ted Kolderie. “At one end is deploring the problem: Oh boy, this is wrong and this is bad. At the other extreme is a lot of We have to, and a lot of visions of how things could be done just right. In between, it’s pretty skinny.”

The Caucus has compiled a library of interviews and policy analyses on its website—a formidable archive that essentially represents a free deep-dive education on public-policy issues, including subjects such as education, labor, housing, eldercare, and economic development. Its internal conversations, however, hinge on larger questions of how to make its voice heard in a very different era in legislation, journalism, and public discourse. There’s a profound need for the depth of thinking the Caucus represents, and the group is poised to become an essential voice.

“We have thoughtful people with good ideas that don’t seem to see the light of day the way they should,” says Ostrow. “There is a level of frustration, and that’s one of the things that we’ve been working through. Do we think of ourselves primarily in terms of education or do we want to be advocates? Ultimately, our sweet spot is being advocates for the marketplace of ideas—and democracy flourishes when good ideas get considered and debated and implemented.”

Kolderie believes that, even today, Minnesota has a fairly unique politics of bipartisanship that somewhat contrasts with the profound national divide—a tradition that the Caucus hopes to nurture forward for upcoming generations. Clay points to success influencing legislators on the details of their proposals and is only half joking when she says she is thinking big about the organization’s potential.

“I want to call up Mark Zuckerberg and offer us up as a positive project,” she says—and it’s true, the work of the Caucus is the antithesis of social media’s influence on how politics is discussed. “We think we can do more to tap civic-minded potential.”

As the Friday meeting adjourns, the dozen interrogators pack up and head out to enjoy the springtime morning. The meeting’s minutes will be posted to the Caucus website (www.civiccaucus.org), a set of detailed insights and recommendations for cutting the Gordian knot of state tax legislation—for this session and those to come. Next week there’ll be another puzzle to solve, and another after that.

“That’s what the Civic Caucus tells us,” Durenberger adds. “It’s not that we’ve run out of ideas, and we sure as heck haven’t run out of problems.”

Quinton Skinner is a Twin Cities–based writer whose work has appeared in numerous magazines and newspapers. He is the cofounder of Logosphere Storysmiths.