Pioneer Press: In praise of intelligent decision-making — and the Citizens League 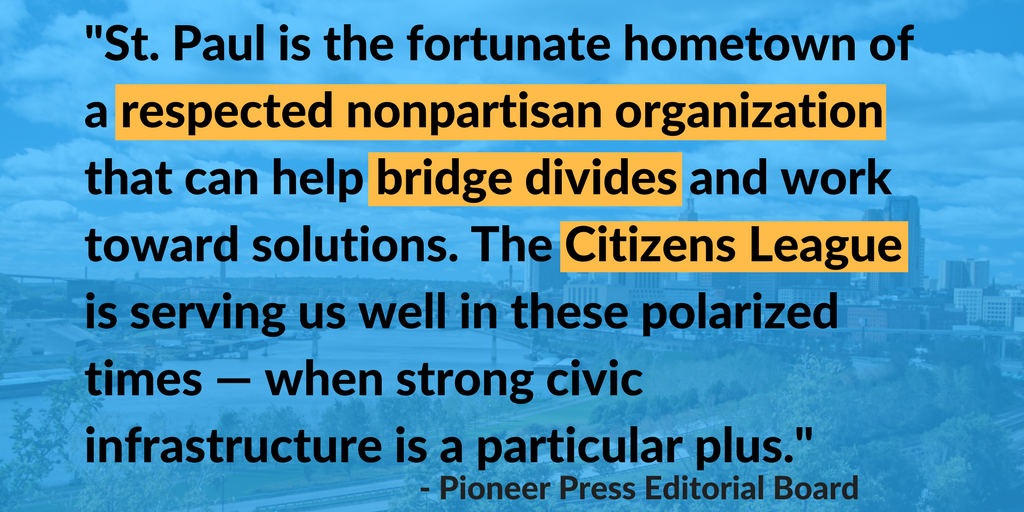 The Pioneer Press Editorial Board recognized the Citizens League in a recent editorial as a much-needed body with recent successes in these times of political and ideological division:

In recent months, the league’s contributions have had a high profile among St. Paul leaders. In its important role as a “neutral convener,” the league formed a study committee to help the city decide if it should adopt a so-called PILOT — payment in lieu of taxes — program under which some tax-exempt properties would make contributions to help cover the cost of city services they receive.

Late last year, city council and foundation representatives again turned to the league in an effort to assure that St. Paul’s coming conversation on a minimum-wage increase takes place on a firm foundation. In a few weeks, the league will report on key questions policy-makers will need to answer and the “stakeholders” who should be involved, in addition to an assessment of research on the issue.

At a time when big issues are being debated in a few words on social media, Ann Mulholland of the St. Paul Foundation told us, the Citizens League brings together people with a variety of perspectives and points of view “in a safe place” where they can “have a real conversation.”

We’re thankful for these kind words of praise from the Pioneer Press Editorial Board, as well as our community partners quoted in the story. We believe it’s important – now, more than ever – to find solutions to some of our biggest problems by bringing diverse perspectives together to find common ground. We’re glad others think so too.

Read more about our Saint Paul PILOT Project, and our current work surrounding changes in the minimum wage in Saint Paul.

Read the entire editorial here: Editorial: In praise of intelligent decision-making — and the Citizens League