Join us for A Good Debate: Whose Streets?

Join us on June 26 at 6pm at Icehouse in Minneapolis for A Good Debate with Representative Nick Zerwas and Representative John Lesch to discuss disruptive protests.

A new generation of protesters is becoming increasingly disruptive, blocking streets, shutting down transit lines, and occupying major thoroughfares to demonstrate against fatal police shootings across the country and in Minnesota.

Those that support the right to these demonstrations cite free speech and freedom of assembly. On the other hand, some believe protests that obstruct traffic pose a public safety risk, and that free speech doesn’t include actions that put others in danger.

How should Minnesotans respond to protesters blocking highways? The Minnesota Legislature passed a bill this year, authored by Rep. Nick Zerwas (R), that would have increased penalties for protesters that block traffic, arguing that the measure would “preserve the public’s right to safety and reliable transportation.”

Read: A Good Debate: Whose Streets? in Citizens League Voice

Rep. John Lesch (DFL) also opposed the bill, arguing that such a proposal would “misguidedly intimidate Minnesotans from exercising their rights to free speech”.

Are disruptive protests that block traffic putting the general public in harm’s way? Or is the right to these demonstrations crucial for meaningful dissent? 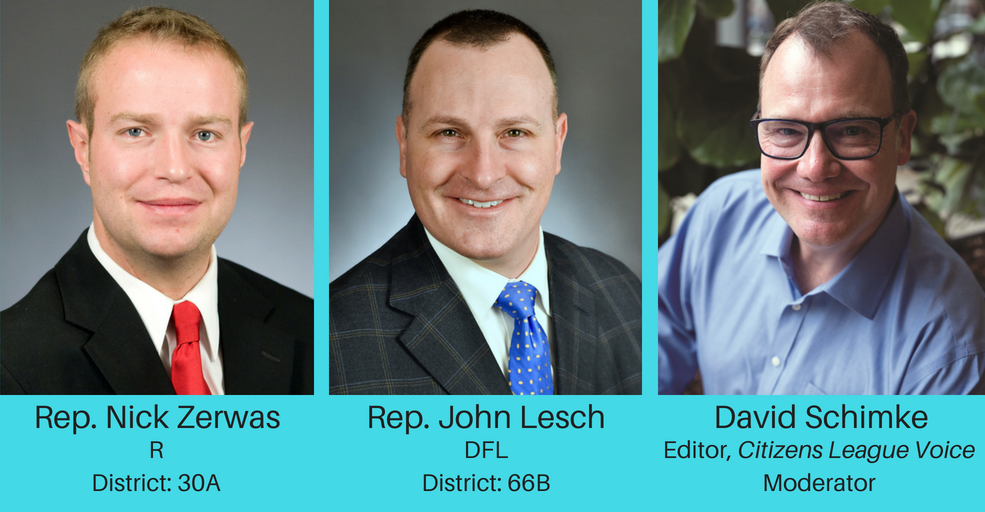 Join us on June 26 at 6pm at Icehouse in Minneapolis for A Good Debate with Rep. Zerwas and Rep. Lesch as they discuss their sides of the argument surrounding disruptive protests. We will allow ample time for audience questions and comments as well.

A Good Debate:
Whose Streets? The Case For and Against Disruptive Protests
With Rep. Nick Zerwas & Rep. John Lesch
Moderated by David Schimke, Citizens League Voice editor
Tuesday, June 26th
Doors: 5:30pm | Debate: 6:00pm
Tickets: $10
Icehouse
2528 Nicollet Ave
Minneapolis, MN 55404 (map)
TICKETS
This is our very first Good Debate event! Stemming from the Citizens League Voice, our quarterly publication for our members, the impetus behind A Good Debate was a recognition that meaningful conversation and respectful, evidence-based discourse is lacking in the public sphere. Our desire is model thoughtful dialogue that encourages disagreement and discourages rancor.

This Good Debate event is generously sponsored by Comcast, with additional support from Darla Kashian of RBC Wealth Management.