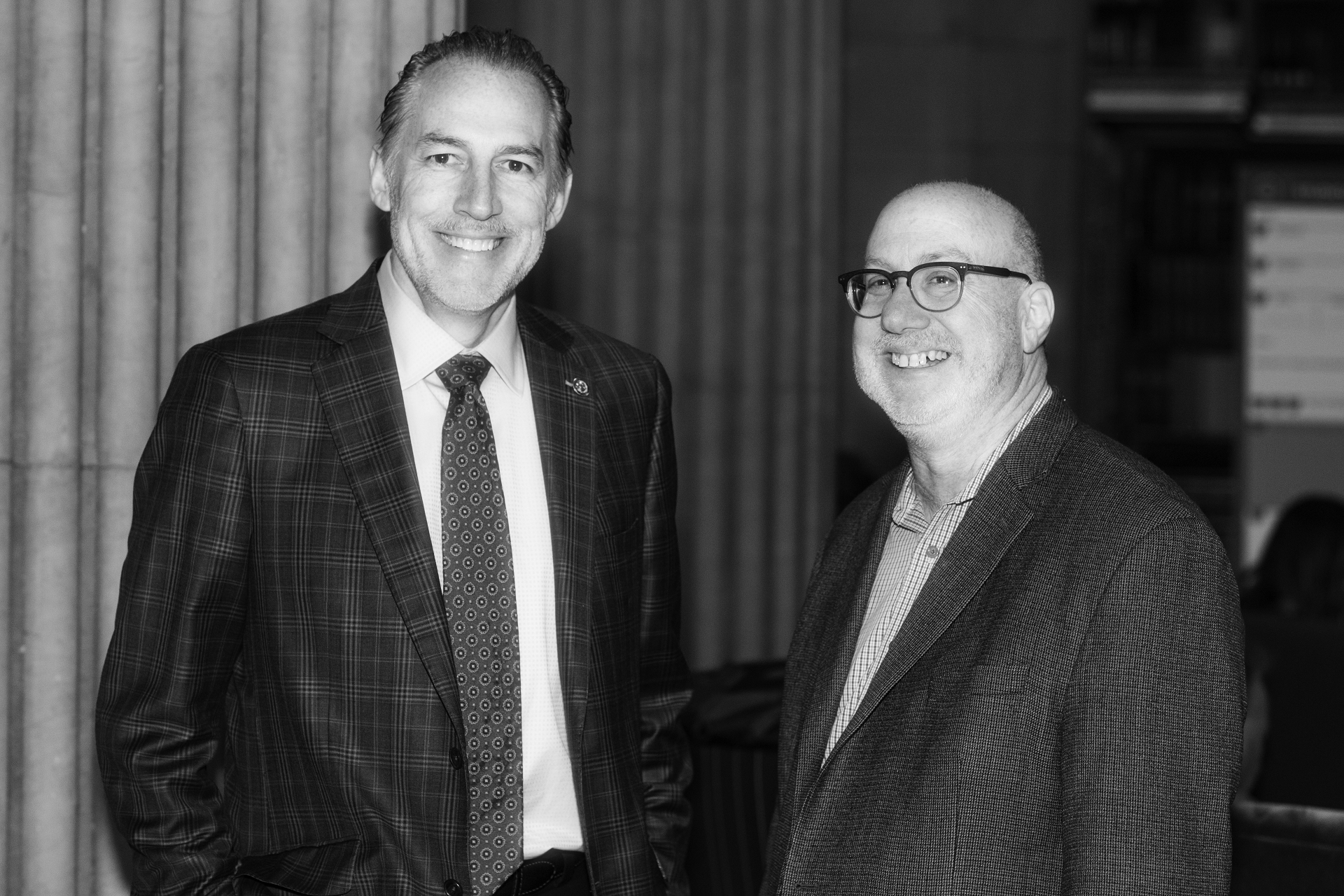 At ManyOne, legislators leave political labels at the door and explore essential issues

In an ideal world, a legislator’s job would entail a healthy balance of learn­ing and advocacy, with the understand­ing that you can’t create or champion effective solutions before understand­ing an issue from all angles. Too often, though, there’s little opportunity for policymakers to shed the predetermined strictures of their political affiliations long enough to approach an issue with a “beginner’s mind.” Studio/E’s ManyOne program for Minnesota state legislators is an effort to help interested lawmakers break this habit.

Nate Garvis and Tom Wiese cofound­ed Studio/E in 2012 with a vision of creating an experiential learning commu­nity that would help creatives, Fortune 100 executives, entrepreneurs, artists, authors, activists, faith-based leaders, small-business owners, and nonprofit leaders navigate and activate big ideas. The program is dedicated to the idea of exploratory leadership, a concept that emphasizes the value of what they call “extreme diversity”—economic, social, philosophical, and circumstantial. “If you want to learn and grow, you have to hang out with people who are different than you,” Garvis says. “It’s a requirement for growth.”

“If you want to learn and grow, you have to hang out with people who are different than you. It’s a requirement for growth.”

Shortly after his organization’s launch, Garvis started talking with his friend Dean Phillips, head of the Phillips Family Foundation, about the growing need for legislators in particular to have a space to think and act outside the limiting framework of their partisan identity. “We talked about how legislators [of different parties] too often get punished for reaching out, collaborat­ing, or getting to know each other,” says Garvis.

The two concluded that it would be powerful to invite bipartisan pairs of legislators to participate in Studio/E, giving them a safe space to get to know each other on a first-name basis in an environment where their party labels were less im­portant than their creativity, resourcefulness, and ability to make new connections, both personal and intellectual.

The Phillips Family Foun­dation began sponsoring two legislators from opposite sides of the aisle to join each new 24-member Studio/E cohort, at a membership rate of $6,750 per person. (Two new cohorts launch each quarter and meet four times over the course of a year.) The first few legislators who completed the program were so enthusiastic about it, they approached Phillips and Garvis with a request to come up with a common brand for the politicians who participate.

“They came to us and said, ‘There’s something bigger here,’” Garvis says. “It’s differ­ent than the Purple Caucus [a bipartisan caucus launched in 2013]. It’s not just for moder­ates. It’s a post-political culture among legislators.” At a lunch meeting to discuss a possible name for the sponsorship program, Phillips pulled out a dollar bill and pointed to the phrase E pluribus unum, Latin for “Out of many, one.” Thus the program was christened ManyOne. It has now ushered more than 20 state legislators through Studio/E’s curriculum of exploratory leadership.

All who participate in Studio/E are asked to arrive with a “big idea” they’d like to work on—whether a brand-new notion or a concept they’ve been grappling with—that will ultimately be filtered through the program’s curriculum of entrepreneurial and design thinking. ManyOne participants aren’t required to use a specific piece of legislation as their big idea, though some have done so with great success. Former state senator Terri Bonoff, one of the first ManyOne participants, used her time in the program to de­velop what eventually became the Minnesota PIPELINE Project, established by a bipartisan piece of legislation passed in 2014 to expand dual training-and-apprenticeship programs.

The relationships and connections that emerge from the ManyOne program have also influenced Minnesota state politics in more subtle ways. Brian McClung, former deputy chief of staff for Governor Tim Pawlenty, and Marcia Zimmerman, senior rabbi at Temple Israel, were in the same Studio/E cohort and became friends despite their decidedly different political leanings. In 2013, McClung was toying with the idea of au­thoring an op-ed urging the Minnesota GOP to support a bill allowing same-sex marriage, but he knew it was a risky stance to take and could alienate him from his fellow Republicans.

Knowing that Rabbi Zimmer­man had extensive experience communicating strong opinions in her weekly sermons, McClung consulted with her and drew on her expertise and encouragement to finish a piece for the Star Tri­bune. The Freedom to Marry bill passed the Minnesota Legislature in 2013 by a single vote. Former state senator Branden Petersen, the lone GOP state senator to vote in favor of it, later became a Studio/E member himself and told Nate Garvis that McClung’s op-ed had influenced his decision to vote the way he did.

“I’m not sure [McClung] would have written that op-ed without the safe community Studio/E provided to think and act [in a new way],” says Garvis. “He and [Rabbi Zimmerman] had met first-name-first, not label-first, and their bond of trust and friendship let him share something anxiety-producing.”

McClung’s consulting firm MZA + Co has since taken an ac­tive role in facilitating the ManyOne program, helping to identify and recruit legislators who would be a good fit. “A big part of the value for elected officials is getting them out of their traditional setting, the state capitol, where they have to line up with their team, and putting them in a setting with entrepreneurs, people from education, retail, healthcare, and more,” says McClung.

“We’re not trying to move all these people to the mushy middle. You don’t have to be a moderate or have your thinking approach the other side’s thinking. You don’t have to abandon your principles; you can just set aside the labels and look for good ideas that work.”

In 2016 MZA + Co, the Citizens League, and Studio/E worked together to produce the first ManyOne Learning Lab, a forum designed to illuminate a public challenge and explore possibili­ties possibili­ties without immediately leaping into policy positions.

Although Studio/E’s ManyOne program is a yearlong project consisting of quarterly daylong, members-only meetings, the Learning Labs are shorter one-time events open to a wide range of stakeholders on a given issue, not just Studio/E members.

“[When I present about criminal justice reform], usually it’s all defense attorneys or prosecu­tors or Second Chance Coalition supporters,” says Senator Latz, who participated on the panel. “Here you had a range, so you could have a back-and-forth with an audience of people in a position to do something about it down the road. In the legislature, we have committee hearings but not a lot of opportunities to have wide-ranging discussion on policy topics. The forum was a good opportunity for that.”

In one sign of the event’s suc­cess, a post-discussion happy hour that was scheduled to last an hour ended up running almost twice as long, as attendees exchanged business cards and engaged in conversation. MZA + Co, the Citizens League, and Studio/E intend to hold future ManyOne Learning Labs on a quarterly basis; the events will continue to focus on problem areas that lend themselves to bipartisan back-and-forth, including renewable energy, education reform, opioid abuse, and transit and transportation.

Representative Dario Anselmo (R-49A) was in the audience of the November Learning Lab and enjoyed it so much that he signed on to be a 2018 ManyOne participant. His Democratic counterpart in the Studio/E cohort that kicked off in February is Representative Frank Hornstein (DFL-61A). Anselmo plans to use his time in the program to explore ways of improving Minneapolis city schools. “I grew up in a large blended family,” says Anselmo. “I was trained by that, so I think I’m a natural fit for what they’re doing: How do we find the 70 percent of things that make us the same and work together to make the commu­nity better?”

MO PERRY is a freelance writer and cofounder of Logosphere Storysmiths, a writing and editing agency. She was named a 2017 Young Entrepreneur by Minnesota Business Magazine, and her writing has appeared in publications including the Atlantic, Experience Life, and Minnesota Monthly.