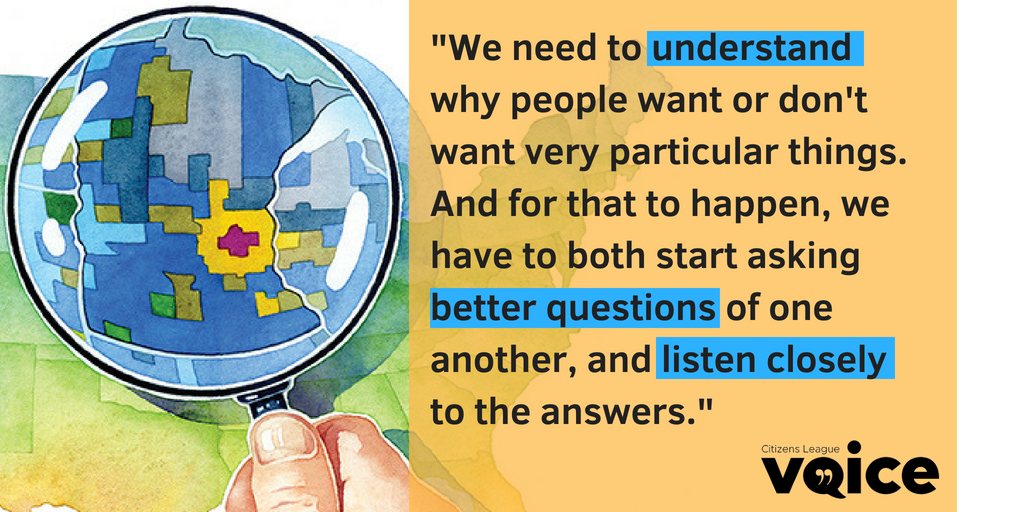 Journalist Dante Chinni on the nation’s political differences, the divisive nature of easy ideological labels, and the need for nuanced data

On the eve of the 2008 election, reporter Dante Chinni began searching for ways that he could combine statistics and anecdotal storytelling to describe the America he’d seen strug­gling and striving. Marveling at the country’s coast-to-coast diversity, he was particularly keen to transcend the media’s habit of coloring swaths of the republic red or blue, which does little in the way of explaining behavior but does conjure up frustratingly simplistic and polarizing stereotypes.

A “journalist not a statistician,” Chinni says he sought out a research partner and found that a tendency toward overgen­eralization also plagues academe, where the study of voting patterns often fails to transcend party polling. Then he met James Gimpel, a professor of government at the University of Maryland who was interested in developing a deeper data set.

Ultimately, the two created twelve demographic desig­nations—College Towns, Evangelical Hubs, Military Posts, etc.—based on a variety of factors including age, race, religion, income, education, occupation, population density, available employment, and rates of consumer spending. The resulting book, Our Patchwork Nation: The Surprising Truth About the “Real” America, compares and contrasts facts and figures from the country’s over 3,100 counties (not its voting districts, which is more typical) to unearth unlikely similarities and nuanced differences that defy coarse dichotomies, like black and white, urban and rural. The outcome, writes broadcast journalist Ray Suarez in the book’s foreword, is “an appealing, versatile, and rich analytical tool for taking the country’s economic, political, and social temperature.”

The exercise proved prophetic. In the two elections since, the divide between Republicans and Democrats has deepened just as the explanation for that divide has become increasingly divisive. Concurrently, Chinni refined his approach under the auspices of the American Communities Project (ameri­cancommunities.org), which is housed at George Washington University and partnered with the Wall Street Journal, where Chinni works with the political team, and NBC News, where he provides analysis for Meet the Press. In early July, the 49-year-old, who also serves as ACP’s director, talked about the cate­gories he and Gimpel pioneered (there are now 15) and why he still believes Americans can come together to solve their common and uncommon problems. 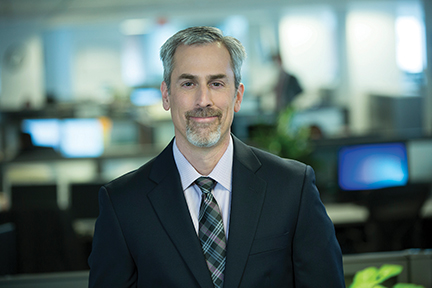 DAVID SCHIMKE: What motivated you to begin this work?

Dante Chinni: The thing that I found when I traveled around the country is that you can’t look at the U.S. using aggregate numbers and averages, and hope to understand what’s going on. It’s just too complicated. On the other hand, it’s too easy to just say that every place is different because, yeah, of course every place is different. But that doesn’t mean you can just throw up your hands and say that every place is so unique that we can’t categorize it or make sense of certain trends. To make sense of the country it helps to break it into its pieces, find the similarities and differences from place to place, and then organize those pieces in different ways so that you can see how everything works.

DS: The predominant political narrative is that we’re split between red and blue states. Why not stick to that basic breakdown?

“To make sense of the country it helps to break it into its pieces, find the similarities and differences from place to place, and then organize those pieces in different ways.”
DC: We have two majority parties and labels like red and blue are a way to keep score. Beyond that, those labels don’t really tell you much. Especially because the definition of what it is to be a Democrat or Republican continues to evolve. The Republican Party is going through a lot of turmoil and upheaval right now. And I think the Democrats also have a re-alignment on the way. So the red/blue map is even less revealing. Think of it this way: If you give somebody a few choices and a bunch of people choose choice A and a bunch of people choose B, it might tell you something rudimentary about them. But it certainly doesn’t tell you why they made their choice. I’m not saying that what we do at the American Communities Project always tells you the reasons people make certain choices, but our categories are designed to at least begin exploring those reasons in more detail.

DS: There’s also been a lot written about the rural-urban divide. What are the limitations of those labels?

DC: There’s a lot of polling data available that looks at rural, urban, and suburban breakdowns. That makes sense on some level, because it’s a way to look at population den­sity. So a term like urban can tell you something, but it depends on definitions: When does something urban become suburban? When does something suburban become rural? There’s a lot of gradation within those three types. Things get more complicated when you start looking at what drives a local economy or the differences in a community’s racial composition or median age. In a lot of cases, these things end up becoming hugely important. For example, there are rural places in the south that vote Democrat and some other communities—which on first glance look exactly the same—that vote Republican. Why is that? There needs to be a way to make more granular distinctions.

DS: What if we don’t make those more granular distinctions? What’s the real harm?

DC: Political parties take advantage of these broad, unsophisticated labels for propaganda purposes, which is disap­pointing. Both because it creates an “us versus them” mentality and because it robs of us nuance. Instead of seeing the country as a complex entity, we adopt a sports mentality: my team ver­sus your team. And that makes us susceptible to overly simplistic answers to complex questions.

DS: On the American Communities Project map, much of Greater Minnesota is either categorized as Rural Middle American or Working Class Country. What are some of the differences between the two?

DC: Rural Middle America is not super-rural. These aren’t tiny places. They tend to have a few more people in them. Rural Mid­dle America also tends to be a bit more diverse, with slightly higher income and slightly higher education rates. Working Class Country looks more like what we might stereotypically think of as Appalachian. It’s very white, has a lower education rate, and is slightly lower income. Now, both categories tend to be a bit less densely populated and sparse overall, but looking at the Minnesota map way up north really proves interesting. So, I think the rea­son that St. Louis County is Rural Middle America and not Working Class Country is that it contains Duluth. That’s probably also the case with Carlton County, where there’s enough overflow from Duluth. In both cases, the population is a bit more concen­trated and diverse. 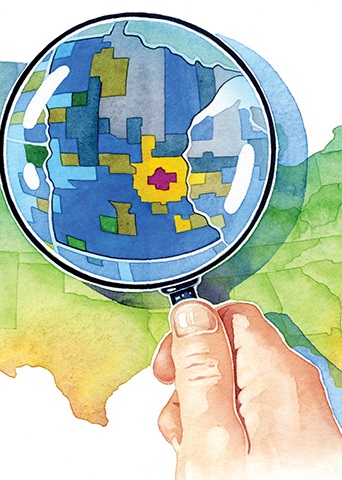 DS: If you replace our broader labels with your more specific categorizations, peo­ple are still going to disagree, aren’t they? Won’t we still be divided?

DC: Democrats and Republicans both have this problem where the other side looks like aliens to them. To begin with, we need to understand why people want or don’t want very particular things. And for that to happen, we have to both start asking better questions of one another, and listen closely to the answers. For instance, there are different reasons peo­ple feel a certain way about immigration reform. Some people might want to ease restrictions, while others might want to build a wall.

Now, I’m not saying that if someone gets a chance to provide a more nuanced explanation of what they think, everyone is going to suddenly agree on the causes and solutions to complex issues. Because a lot of time people believe what they believe for decent reasons. But if I un­derstand why X, Y, and Z is important to you, and you can begin to see why I need A, B, and C, then maybe we can both see a way to give each other a little bit more of what we each want. I really believe that can still happen in this country. That’s the heart of our project.

DS: As the midterms approach, what’s one way the average person can begin to get a better appreciation for life outside their own categorical bubble?

DC: Well, I do think you can consume information from sources popular with those with whom you disagree. And, hey, don’t stop following people on social media because you disagree with them. I know that’s hard, because you’re probably going to see deeply disturbing things from people you, quote-unquote, “thought you knew.” But instead of being disturbed, try to look at it and try to understand it. And sometimes, it simply helps to get a more colloquial view of things. If you live in a large city and want to have a better feel for a rural issue, like soybean tariffs, hop online and read a paper like the Des Moines Register. We live in different worlds from one another, and unless we get a chance to see those worlds through various lenses, we aren’t going to understand or care.