To Afflict the Comfortable 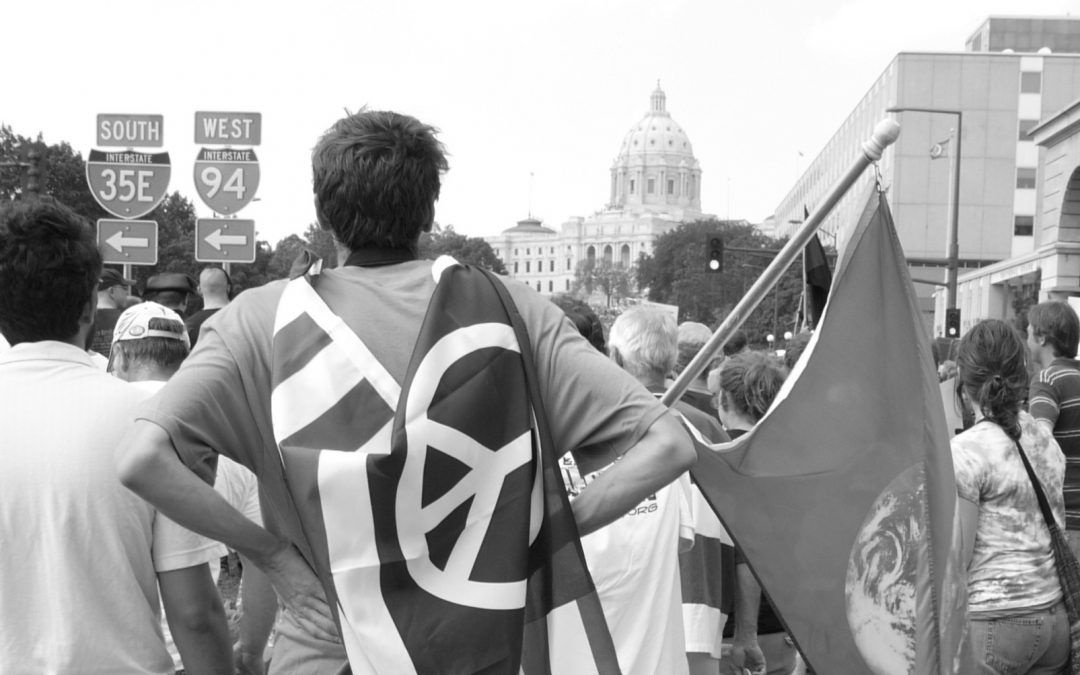 For many people of color, protest isn’t a strategy to be analyzed—it’s a matter of life and death.

Any debate or conversation about injustice, problem solving, or social change should begin by acknowledging that we often have different experiences, different narratives, and different beliefs. And so, the ways in which we express our approval or dissatisfaction can and should vary radically.

For instance, the places that many communities of color call home and the places that many whites call home are just a few miles away, but they’re often worlds apart. These worlds have been forged over a long history, marked by racist public policy, poisonous attitudes, morally bankrupt economic policies, and geography. In his 2016 book Democracy in Black, Eddie Glaude Jr., chair of the Department for African American Studies at Princeton University, calls this inequity the value gap. Others simply define it as white supremacy.

It is tempting for some to think that 150 years after the Civil War, 50 years after the civil rights movement, and 9 years after the election of our first black president, we have effectively addressed structural discrimination, life is fair, and anybody who works hard can make it in this land of equal opportunity. A consequence of this way of thinking is the tendency to absolve organizations and institutions that hinder mobility and perpetuate bigotry.

Too often the spaces where race, place, and injustice intersect most intensely are the same spaces privileged people rarely see. Hidden by race. Hidden by place. Hidden by privilege. Protest seeks to disrupt this comfort by criticizing the dominant culture. For communities of color, blocking traffic or temporarily impeding commerce or claiming a piece of land is also a public crying out, a life-and- death rejection of a society stubbornly organized around a certainty that black lives are inherently less valuable than others. It’s an attempt to bring society’s harshest realities out from the shadows.

Consider the issue of housing. Today, shelter is treated as a commodity. To mediate the economic imbalance of this reality, well- meaning policymakers might push for an inclusionary zoning policy, which would require developers to mix in a few more affordable units per project. We’ll call this static enhancement. A different approach would be to create a universal housing voucher program that would transform housing from a mere commodity to a human right, ensuring that no one, particularly people living in poverty, would have to pay more than 30 percent of their income for shelter.

This would require upending traditional markets and reconsidering profit margins and opinions about who is or isn’t deserving of our support. That’s transformational justice. The former is geared toward incremental change. The latter requires challenging the dynamics that perpetuate racism in the first place. And that requires making noise, getting in the way, and making people uncomfortable.

Now, depending on your experience, your world, I can understand how someone lobbying against inconvenient and intellectually challenging activism might seem reasonable. After all, if your relationship with the police has always been positive and helpful, then the idea of defunding police departments sounds threatening, even silly. I can even see how the idea of raising the minimum wage might not make sense to people who can afford a mortgage and still have money left for additional necessities and comforts.

It’s all a matter of perspective, after all. A 2011 study done by researchers at Tufts University’s School of Arts and Sciences and Harvard Business School showed that while whites’ and blacks’ estimates of overall racial bias in the 1950s were similar, whites who were polled some 60 years later believed that racism against whites had increased significantly as racism against blacks had decreased. According to the authors of the study: “These data are the first to demonstrate that not only do whites think more progress has been made toward equality than do blacks, but whites also now believe that this progress is linked to a new inequality—at their expense. Whites see racial equality as a zero-sum game, in which gains for one group mean losses for the other.” A 2014 poll conducted by the Pew Research Center after the killings of Trayvon Martin in Sanford, Florida, and Michael Brown in Ferguson, Missouri, showed that in both cases a plurality of whites believed that race received more attention than it deserved.

In one world there is a narrative that everything is OK, while for others it is clear that it is not. Oblivious to how the world really works, believing that racism is a historical artifact, too many white folks fail to appreciate or believe the overwhelming evidence that centuries of institutional and structural racism still shape our world in the 21st century. Working for change based on the transformation of white people’s minds or hearts has become untenable. Instead, we must confront the disturbing truth that the public policies of yesterday still shape the racial landscape of today.

Today’s protesters are endeavoring to replace the top-down politics of oppression and exploitation with the bottom-up politics of compassion and justice. And while that’s messy, it’s about more than public spectacle. It’s about refusing to be placated by short-term promises and instead taking a longer, more transformative view. It’s about forcing politicians and public officials to more carefully articulate, and defend, their values to people from all walks of life. It’s about making it unacceptable for the death of a black or brown citizen at the hands of the police to pass without comment and consequence.

“At every moment in history, oppression has been met with resistance,” author, academic, and activist Marc Lamont Hill wrote in his 2016 book Nobody: Casualties of America’s War on the Vulnerable, from Ferguson to Flint and Beyond. “In every instance in which a state has consigned the vulnerable to the status of nobody, the people have asserted that they are, in fact, somebody. In doing so, they offer hope that another world is indeed possible, that empires eventually fall, and that freedom is closer than we think.” 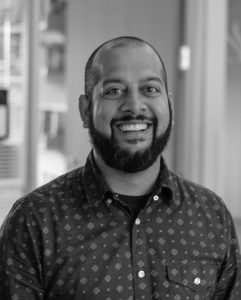 NEERAJ MEHTA is the director of community programs at the Center for Urban and Regional Affairs at the University of Minnesota and adjunct faculty member at the Humphrey School of Public Affairs. He lives in North Minneapolis with his wife, Erin, and two boys, Ezra and Koen.

Confronting institutional racism requires making noise and getting in the way.

Racism is deeply entrenched. Blocking traffic is a public crying out.

Legislating how protests are conducted is really a response to what they’re about.

You refer to bottom-up policies of compassion and justice. What does that look like in practice?

NM: There’s so much of how we typically go about doing work on these issues that comes from the top down, from a hierarchy of who has the “right” information or skills or knowledge to address a particular challenge. And we marginalize the knowledge, experience, and wisdom of the people and communities who are living with the problem. I think that policing is a great example of where we need to do a better job of listening to people who are directly affected. We also need to work harder to turn some of the control and decision-making over to the broader community. That’s a little bit of the bottom up.

You go so far as to say that changing white people’s hearts and minds has become untenable. If that’s true, and if white people are not integral to the movement for black lives, can one truly expect systems to change?

NM: I do think white allies and white people have a role to play, and maybe an integral role. But what I’m ultimately arguing has more to do with who holds the power. And I’d rather spend my energy shifting that power balance than trying to make white people more loving and kind and empathetic.

Can transformational change take place without first accomplishing a set of incremental policy changes, what you might call static enhancement?

NM: I think we have to get out of binaries. It’s not change the hearts and minds of white people or build the power of black and brown people. It’s both. It’s not just go upstream and get to the root cause or deal with the thing right in front our face. It’s both. And we have to figure out how we’re doing both. Now, part of the point I’m making is that we’ve over- emphasized one over the other. And so, I might be arguing for a shift in the balance of how we approach these things. But I’m not saying it’s one or the other.

What about polarization, though: Don’t disruptive actions make people more apt to stereotype a group or dismiss them altogether? Doesn’t it make it harder to come together on substantive change?

NM: I hear this criticism, and it assumes a particular goal: that I’m protesting so that the people who disagree with me will be more willing to get in a room with me to think about what to do. That’s not necessarily the end game. I mean, it might be for some people. But part of what I note in my essay is that protest is our public lament. It’s about filing a public complaint. If you agree or disagree, I don’t care sometimes. Now, saying that, if you look at the movement for black lives, people are doing work that goes beyond the actual protests, like releasing a platform last summer. There is also healing work that the movement does. There is a lot of trauma from being oppressed for centuries. If I see a protest as an isolated thing and assume nothing else is involved, then I’m not doing the work of really digging into the broader movement.

A frequent criticism of organizations such as Black Lives Matter is that their street protests, unlike the most seminal marches of the civil rights movement, aren’t tied to an actionable set of grievances.

NM: It might be clear to someone today that segregation was wrong and demanded civil disobedience. But it was not clear back then. If the same person who is troubled by Black Lives Matter’s tactics today were transported back in time, he or she would be saying, ‘Wait a minute, our society is separate but equal. Separate but equal. That’s what Jim Crow is about. I don’t see what you’re fighting for here. Why do you want to sit at our counters? You’ve got counters. Why do you want to drink at our drinking fountains? You’ve got drinking fountains.’ You can’t evaluate what’s going on today by looking backwards. ‘What are we asking for?’ We’re asking not to be shot by police. We’re asking not to be perceived as a danger simply because of the color of our skin. If you say you don’t know what we’re asking for, you’re not paying attention.