Citizens League Voice: One Meal at a Time 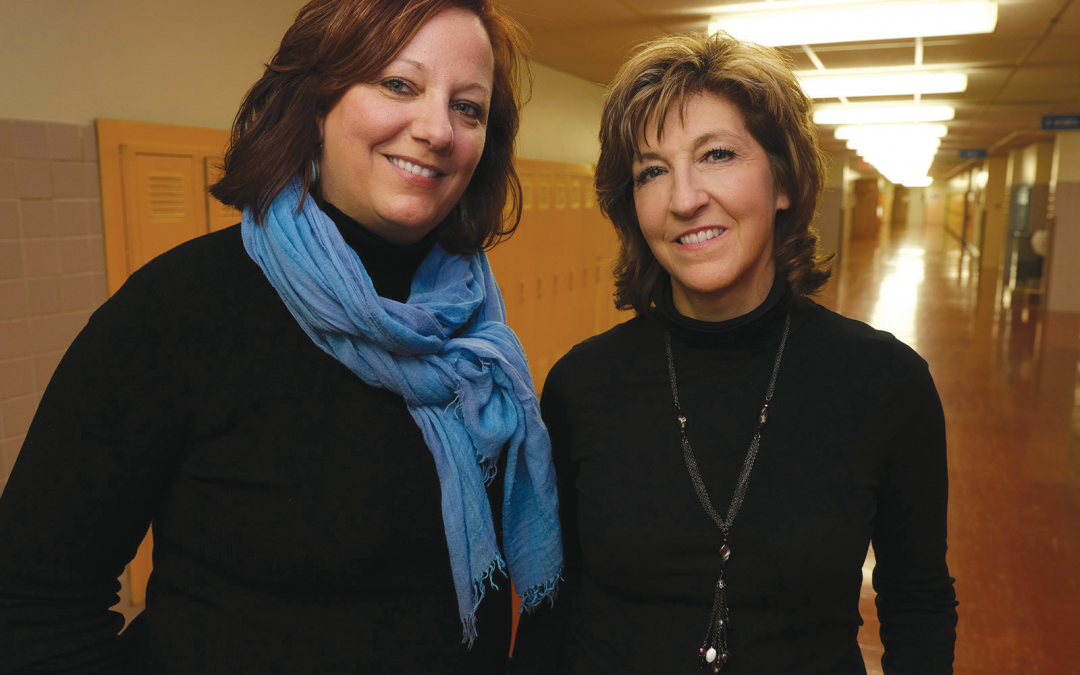 Newcomers to Minnesota—whether they come from Kansas or Myanmar—often find that it can be a little cold in the Land of 10,000 Lakes, in more ways than one. Longtime inhabitants tend to socialize with the same people they have always known, surrounding themselves (intentionally or unintentionally) with familiar experiences and viewpoints. Even as the state ages and diversifies, there’s still precious little interaction across races, cultures, faiths, classes, and generations.

“There is a real gap in how we socialize in Minnesota. We aren’t neighborly,” says Mary Sue Hansen, director of the Suburban Ramsey Family Collaborative (SRFC), a partnership of schools, government agencies, nonprofits, health providers, and youth organizations that concentrates on wellness, learning, safety, and security. “When we don’t know people who are different, we can be suspicious of that difference. We don’t understand each other. Ultimately, that contributes to the very serious problems we are now facing in our state—issues like policing, achievement gaps, lack of equity, and lack of opportunity.”

Hansen had spent two-thirds of her 30-year SRFC career working with program manager Peggy Huot-Hansen (no relation) on prevention and early-intervention initiatives, helping at-risk individuals and families navigate mental health challenges, racism, housing needs, and educational barriers. As the years had passed, the two had become increasingly convinced that for the agency to properly serve the people walking through its doors, the wider community had to be cognizant of the issues affecting its members, no matter their economic circumstance or social status. In the wake of that realization, they sought to engage as many people as possible in a more inclusive kind of interaction.

Then, in 2015, Hansen got invited to a dinner at Marnita’s Table.

“When we don’t know people who are different, we can be suspicious of that difference. Ultimately that contributes to the very serious problems we are now facing in our state.

In the hopes of creating new connections and encouraging dialogue on a variety of pressing issues, Marnita Schroedl had begun hosting big dinners in her Minneapolis home when she relocated from the Pacific Northwest in the mid-’90s. At first the goal was just to get know her neighbors a bit better. By 2005, the popularity of the get-togethers had convinced Schroedl to formalize the experience and brand it Marnita’s Table. Then she began to look for ways to partner with other organizations and expand, including planning trainings for people and organizations that wanted to host their own dinners, which have come to be known as Intentional Social Interactions, or IZIs. (And yes, the Z stands for “Social.” It just sounds more fun that way.)

“The moment I heard about the IZI model at Marnita’s Table, I knew it would work for [SRFC],” Hansen remembers. “I knew it would thrive in a school and community setting and help us get to the heart of what is ailing our community. When you sit down, break bread together, and hear each other’s stories, all kinds of amazing things happen.” 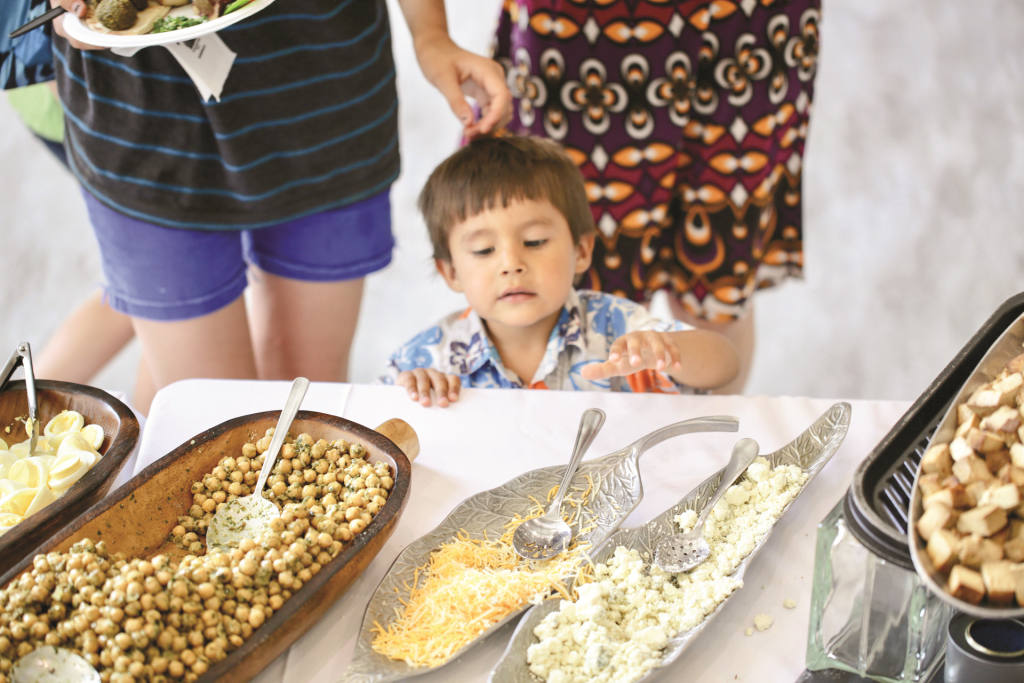 Food and family build relationships at an IZI event.

Each IZI has a theme, such as education or homelessness, and the guests—as many as 150 at a time—come from a wide variety of ages, economic conditions, and cultural backgrounds. Someone greets people at the door and shows them to a table. Each table has a set of conversation-starter cards, with questions such as “Do you have a favorite tradition, holiday, or ritual?” and “What is the best advice you’ve ever received?” People sit down together, start with the questions, and then move on to more natural conversation. Inevitably, say Hansen and Huot-Hansen, people find that they have more in common than they thought.

“Almost everyone who’s been to an IZI has been transformed. The experience teaches us ways to bridge differences,” Hansen says. “I’ll hear people say, ‘Look at how much we have in common,’ and ‘I never knew that.’ Sometimes people will discover they already have connections. At one event, the mothers of two girls who were friends at school met for the first time. One was Muslim and the other was probably from a Judeo-Christian background. After the mothers made a connection, they were put at ease, and the girls were allowed to play at each other’s houses.”

Since 2014, more than 5,000 people in Ramsey County have attended an IZI event hosted by Hansen and Huot-Hansen at SRFC. As a result, the organization has seen increased parent engagement with schools, the development of leadership skills in youths, and better relationships between students and teachers. Shifts occur in both understanding and behavior. “A teacher who attended an IZI had, you could say, a reputation for being strict with her students,” Huot-Hansen says. “After she saw them working in this setting, and heard them share their perspectives, she changed. They started getting positive phone calls home. Instead of handing down punishments, she would say, ‘I want to hear your side of the story,’ and that simple act of listening—that was incredible to the students. It led to more positive interactions across the school. Our hope is that this kind of understanding rolls out to communities.”

In 2017, the Citizens League launched the Calling Home initiative, designed to help people of all ages and backgrounds prepare for the needs of a rapidly aging population. As is often the case when staff at the organization look to engage different communities and community members throughout the state, they knew it would be important to find people who have deep relationships and roots in various cities, towns, and neighborhoods.

Since the number of Ramsey County residents over age 65 is expected to double between 2014 and 2040, and because Hansen and Huot-Hansen are so well liked, well regarded, and well connected in the Ramsey County suburbs, they were asked to plan a series of Calling Home events. The two women’s connections, sensibilities, and experiences with IZIs paid off immediately. Not only were they able to gather a representative group of adults from the area, but they made sure to reach out to younger people too. “You have to go where the energy is, and the energy is with the youth,” explains Huot-Hansen. 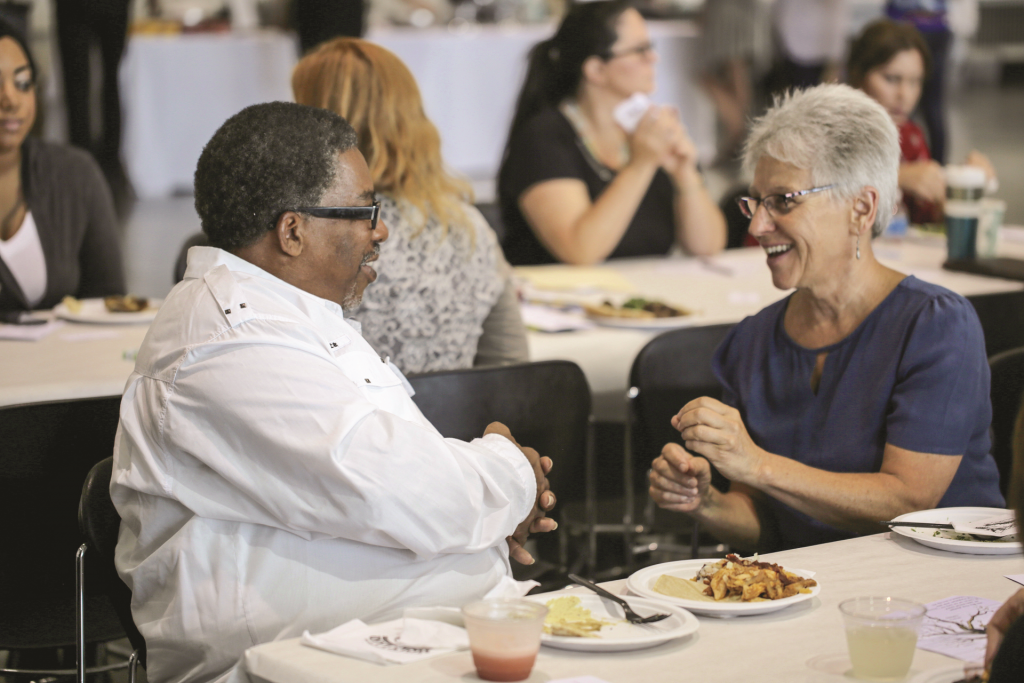 The two women recruited high school students to welcome attendees, serve as hosts, and even facilitate certain gatherings. Some of the kids were already integrally involved in the lives of older relatives and neighbors. For others, like Naeem Williams, a junior at Mahtomedi High School, it was a brand new experience.

“It’s good to get out of my youth bubble and learn from the older generation. We related situations from our own lives, talking around food, everyone feeling relaxed and safe,” says the 17-year-old, who sat at a table and facilitated a conversation at one Calling Home event. “I learned to appreciate elders and all they’ve accomplished. I hope they learned that youth do care about them and we won’t leave them behind.”

Amy Goetzman is a writer and editor. Her work—which focuses on the arts, culture, technology, and environmental issues—has appeared in MinnPost, Architecture Minnesota, and the Star Tribune. She lives in the suburban Ramsey area.