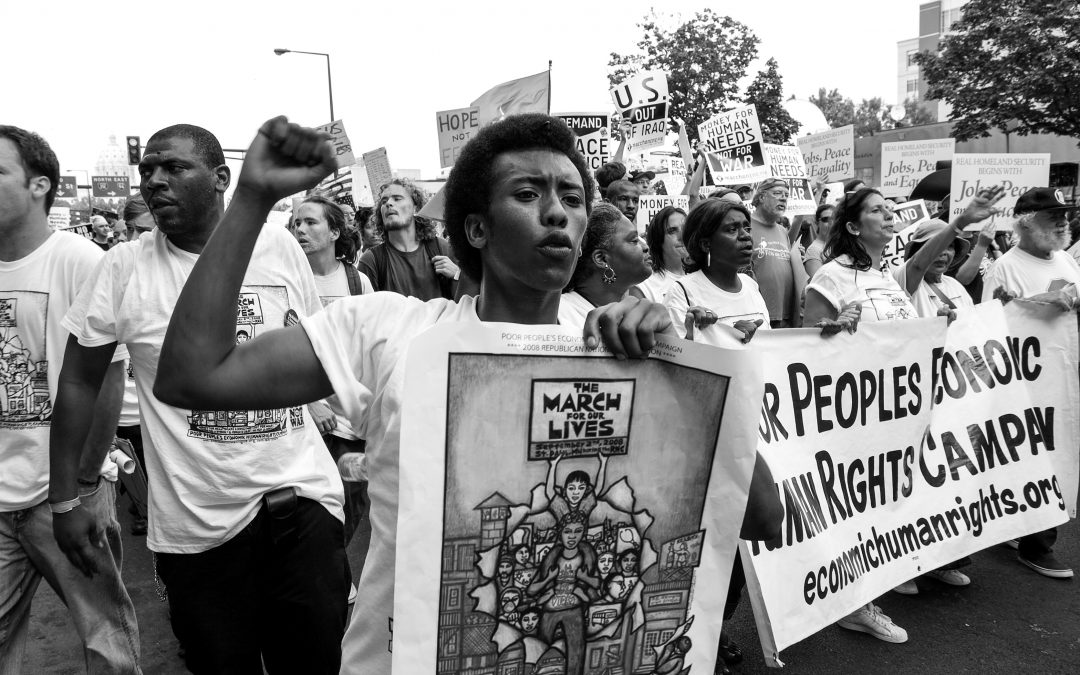 Legislation to address activities that are already illegal chills dissent

In late May, some 100 people, led by members of the Dakota community, convened in protest of artist Sam Durant’s sculpture Scaffold, which was being installed in the Minneapolis Sculpture Garden, a partnership between the Walker Art Center and the Minneapolis Park and Recreation Board. e large, jungle-gym-like installation riffed on the gallows used to hang 38 Dakota men in Mankato in 1862—the largest mass execution in American history.

Protesters covered swaths of fencing surrounding the sculpture garden with signs featuring nooses and phrases such as “Execution Is Not Art.” The messages, which went viral on social media and fed the flood of mainstream media coverage, focused on the cultural appropriation and insensitivity of recasting a cultural tragedy as a playground attraction. At one point, a protester trespassed onto the construction site and hung a banner from the sculpture itself, reading simply “Take This Down.” The message was clear: business-as-usual would not be permitted until people’s concerns had been addressed.

Forty-eight hours after the protests began, Walker executive director Olga Viso announced that the piece would be disassembled. Dakota artist Graci Horne declared the capitulation “a small victory,” adding that the Native American community and its supporters had been prepared to engage in a “marathon” of opposition.

It would be better, the argument seems to be, to apply for a permit, behave in an orderly fashion, and go home after you have had your symbolic say. But that isn’t protest; it’s pageantry.”

The incident is easy to read as another example of how progressivism is fueling energetic social movements in the Twin Cities. Consider the crowd of nearly 100,000 that came out in St. Paul to show solidarity with the Washington, DC, Women’s March the day after Donald Trump’s inauguration, or the thousands of people who flooded the Minneapolis-St. Paul Airport on January 29th in opposition to a Muslim travel ban. We are living in a moment marked by Minnesotans who are using collective action to drive both conversation and change.

As of this writing, though, the ability to demonstrate effectively is under threat from an anti-protest bill that was introduced during the 2017 session and is likely to be heard again in 2018. This proposed legislation would increase the penalties for acts of civil disobedience that result in the blockage of traffic access to highways, airports, or transit systems. The effort is a direct response to well-publicized tactics used by supporters of Black Lives Matter and other Minnesotans outraged by the police killings of Jamar Clark and Philando Castile—and the lack of punishment for the officers involved. The ACLU has denounced the bill, saying it would have a “chilling effect on the exercise of constitutionally protected speech.” And whether it passes or not, the effort and limited debate around it have revealed a seeming aversion to confrontational tactics within the state, and confusion

Yes, stopping traffic is disruptive. Those orchestrating these actions are often cast in the media as violent and are confronted with armed officers carrying shields and ready with tear gas. The images that circulate of these standoffs animate this simplistic narrative and make it easy for those who are uncomfortable with confrontation to write off unsanctioned protests as “out of control” or unnecessarily polarizing. It would be better, the argument seems to be, to apply for a permit, behave in an orderly fashion, and go home after you have had your symbolic say. But that isn’t protest; it’s pageantry. Requiring a permit to oppose police who kill people of color only reinforces the state’s power to decide whose lives are worth advocating for.

People of good conscience have a duty to side with those who bring attention to injustice, and to stand against those who fought to maintain the status quo and quell dissent by insisting that all rallies be sanctioned and all event-oriented protests be relegated to “free speech zones” marked by fences, barricades, and armed enforcers. Otherwise we will only see an increase in anti-protest legislation and crackdowns on free speech.

The effects of such crackdowns can be seen in the case of Louis Hunter, who attended the shutdown of I-94 on July 9, 2016, following Philando Castile’s death in Falcon Heights at the hands of a St. Anthony police officer. Accused of throwing debris at officers during the demonstration, he was the only individual to face felony charges in the wake of the march, and he wasn’t picked up until the following day. Hunter is a cousin of Castile’s. The arrest and prosecution sent a message to the families of victims of state violence that it is dangerous to speak up in the wake of police killings, no matter how unjust they were. As a petition that was circulated by Hunter’s supporter read, “These charges are a clear attempt to silence and punish dissent—it’s the embodiment of the state violence that killed Philando in the first place.”

Only the most sketchy and inconsistent evidence linked Hunter to the property damage that occurred on the freeway and, on August 2, after significant pressure was applied by the community via coordinated call-in days, demonstrations, and petitions, the Carver County Attorney’s Office announced that it was dropping all charges. Upon Hunter’s arrest, however, the police had impounded the vehicle he used to make a living, and his loss of steady income led to the eviction of his family (which includes four daughters). In the past year he has struggled to find steady housing and employment. So while Hunter’s charges were dismissed, his story is just more proof that the state already has plenty of power to punish protesters.

Though few Minnesotans were stuck in traffic due to the outcry over the Scaffold sculpture, the protests were tremendously disruptive to the Walker Art Center. For the donor- and patron- centered institution, the potential to lose the support of its membership or suffer a downturn in visitors because of the reputational hit and appearance of chaos on its grounds proved enough to force change. At some point, the protesters might’ve chosen to block traffic, but it wasn’t necessary. So the difference between the Scaffold protests and the I-94 protests is not one of legitimate-versus-illegitimate or effective-versus-ineffective tactics. The discrepancies are simply remind us that power asserts itself in all sorts of ways, and when people choose to stand up to it, they put themselves at the mercy of forces they don’t have much control over. And hearing people say that being stuck in traffic is a reason to stifle expression suggests we need more disruptive protest, not less. 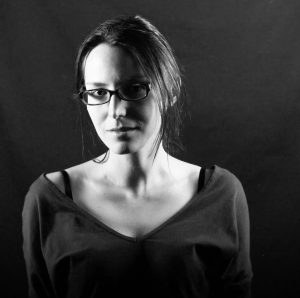 SARAHJANE BLUM has been active in grassroots environmental, social justice, and animal rights campaigns for nearly three decades. She was the lead plaintiff in Blum v. Holder, a lawsuit that challenged the constitutionality of the Animal Enterprise Terrorism Act, a law that has served as a blueprint for many current anti-protest bills. Currently, she serves as chair of Operation 45, a nonprofit dedicated to ensuring transparency and accountability for the Trump administration.

Meaningful dissent is under threat at the Minnesota Legislature.

Minnesotans are averse to confrontational tactics.

Protest without disruption is pageantry. Risks of disruption are overblown. Current penalties are already severe.

Do you object to the fact that blocking access to highways and transit is illegal, or to the proposed increase in penalties, or both?

SB: I object to laws that make the intention of an action more illegal than it would other- wise be. There are already laws on the books that say that there are penalties for blocking traffic. There are already laws on the books that govern where people can stand and sit and how they comport themselves in public. There is a real danger to the entire notion of America as a place where dissent is considered part of the process of building a more perfect union when we start passing laws that make things more illegal because you’re doing them out of conscience. To me, all of these laws have to do with reinforcing the status quo and saying that an unpopular idea itself deserves legislating against. That’s incredibly dangerous.

Those in support of disruptive protest often say the risks are exaggerated. What about the risk of new legislation chilling free speech? If you just take away this one tactic of blocking streets and highways, will it really put us on a slippery slope?

SB: Where the slippery slope comes in is not because it’s taking away the right to block a roadway. We don’t actually have that right. e problem comes in saying it is more illegal to block a freeway because you were doing it as an act of expression. ere doesn’t even need to be a slippery slope. In and of itself, that is a very clear signaling from the government that speaking your mind is something the state is allowed to punish you for. And punish you for at levels that do not align with how we treat other people who are exhibiting the same behaviors.

In July 2016 it was reported that 21 officers from various agencies were hurt when protesters blocked I-94. One officer was hit by a piece of concrete thrown from an overpass. Is this sort of risk acceptable?

SB: I’d like to reframe that question. Because there’s nothing inherent to the tactic of shutting down a bridge that would create conflict with police or that would cause injury to police. If in fact it is true that we are seeing greater instances of physical altercation that could cause harm to police, the better question to ask is: What are the root causes of this? Is it the increased militarization of the police force? Is it that protests that have to do with standing up to systemic police brutality create a scenario wherein the police come in primed for a fight? Is it that there’s just been increasing escalation over the years with no change, and people are increasingly angry? I don’t know what proximally causes a protest to turn into the volleying of sticks and stones back and forth from police and protesters. What I do know is that, by and large, when the police and the public come into contact, the police are better equipped, better weaponized, and typically in inflict far more damage than they receive.

Since they are required to show up, what should the role of peace officers be when a public road is blocked?

SB: I’m not an expert in best practices for policing. I do know that there are tactics and strategies for de-escalating situations that some cities and states try to enact. There are also some changes happening that increase tensions: There’ve been increased budget allowances for things like sound cannons, which are essentially weapons to be used against protesters. I definitely think, at the very least, not walking into the scene gunning for a fight, brandishing the overwhelming force that everybody already knows the police have, would be a better tactic. I would also say that we’re in a moment where the energy and the momentum is towards individuals taking to the public sphere to make their concerns heard, because it’s getting increasingly hard to address hard questions that are important to everybody any other way. I would say the role of police chiefs and police forces is to investigate best practices for interacting with the public, for de-escalation.