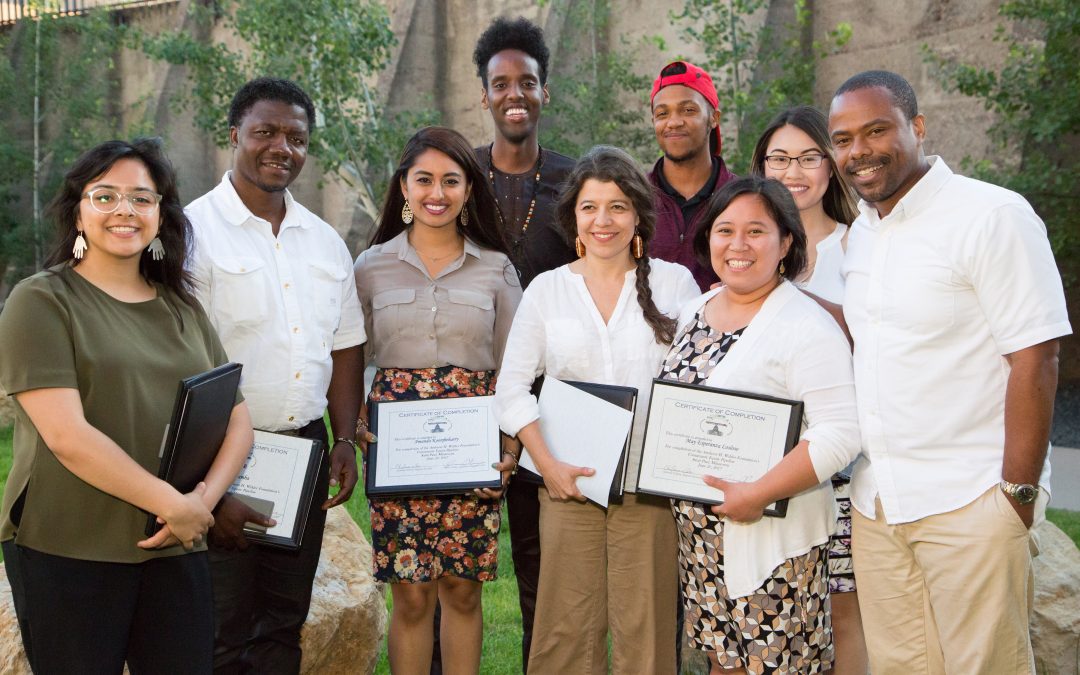 Walking the grounds and wandering the halls of the Minnesota State Capitol, one can’t help but be awed. Its white marble exterior, influenced by the neoclassicist Beaux Arts movement in France, is capped by a three-layer dome inspired by St. Peter’s Basilica in the Vatican. A gilded copper sculpture of a four-horse chariot looms high above the southern entrances, and six classical figures representing six virtues sit just below it. Inside, visitors can view 38 governors’ portraits and the paintings Father Hennepin at the Falls of St. Anthony and Attack on New Ulm.

While taking in the results of the building’s $272 million renovation, it’s also hard not to notice the Eurocentric nature of the place, which mirrors the demographic makeup of its elected members. Seventy-nine percent of Minnesota’s inhabitants iden­tify as Caucasian, as do a whopping 92 percent of its state repre­sentatives. In 2017, in fact, there were just 16 nonwhite legislators, and that’s the highest number in the body’s 149-year history.

It’s no wonder people of color often feel unwelcome—and, as a result, too often feel ill equipped to participate in their democracy.

With the goal of chipping away at the institution’s exclu­sionary veneer, the Amherst H. Wilder Foundation rolled out the Community Equity Pipeline (CEP) in the fall of 2015. A 10-month training program intended for young leaders of color, it’s designed to provide instruction regarding legislative sausage making, as well as give participants the opportunity to work hand-in-hand with lobbyists and lawmakers. (The Citizens League’s Capitol Pathways Program also offers experiential internships at the legislature. It focuses on college-age students with leadership potential.)

Those selected for the program are neither political neo­phytes nor newcomers to the business of advocacy. Typically be­tween the ages of 18 and 30, they are often executive directors or officers from various Minnesota nonprofits. It’s just that, for the most part, they don’t have a lot of experience with the capitol’s nooks and crannies.

“What we want to do is help leaders avoid the first couple years of mistakes that people make when they’re advocating,” says James Chang, the legislative programs lead at Wilder Foundation. “We want to fast-track them to be effective.”

Formal instruction includes direction on how to read bills, analyze budget proposals, and navigate the often byzantine day-to-day. Each apprentice is also matched with a lobbyist and a legislator and then encouraged to spend a significant chunk of time observing the gears of government turn.

For many participants, like Chuayi Thao, director of Achieve­ment Plus, an education nonprofit, the program is akin to a mind-altering field trip. Even though the Hmong American woman grew up in the Twin Cities and graduated from the Uni­versity of Minnesota in 2001, she hadn’t spent much time at the capitol and, as a result, found its physical plant disorienting. Even having a chance to practice seemingly mundane tasks during the 2017 session, like navigating the area’s various parking ramps or finding a committee hearing, was edifying. “I was talking to family members, and many told me they had never been to the capitol, even though we’ve lived here a long time,” she explains. “It’s historically not been an inviting place to people of color.”

State representative Rena Moran can relate. When she was elected in 2010 as part of the first class of black legislators from St. Paul, she felt out of place. “The people I saw didn’t look like the community that I represent,” she says. “And this is a problem because legislators make decisions based on those who come [and testify] before them.”

Moran agreed to mentor the young people who took part in the program this past year and, when they came to her with questions, tried to provide personal insights on the vagaries of the political ecosystem. “The goal is to help people feel comfort­able in a space that can feel uncomfortable,” she says.

Once everyone is up to speed on the process and comfortable with the campus, CEP participants begin to play a role in the way laws are debated and shaped. That’s where Wilder’s volun­teer lobbyists, like Paul Spies, come into play.

Spies, director of the School of Urban Education at Metropolitan State University, also serves on the Coalition to Increase Teachers of Color, which he helped form in November 2015. He understands how frosty the capitol can be to someone who isn’t a professional lobbyist, no matter his or her demographic makeup. “It’s a closed culture,” he says. “That’s just the reality.” Still, Spies believes there are ways to invite oneself into the process and gain some self-confidence.

Before the session began, he shared the teacher coalition’s legislative agenda—which emphasized funding for such things as paraprofessional-to-teacher programs, loan forgiveness, and hiring bonuses—with the CEP participants. Spies then explained the various ways a person or organization can create and leverage opportunities to help achieve goals, including attending hearings, working media contacts, holding events, and taking meetings with allies in the house and senate.

One of the coalition’s champions, and a CEP co-mentor with Spies, is Rep. Fue Lee, who agreed to talk to Wilder’s program participants about the power of forming alliances, particularly when they need someone to sponsor a bill. “It’s about getting in the door and connecting with lawmakers,” says Lee, a Hmong American man from Minneapolis. “It’s tough. It takes a while.”

Many of the teacher coalition’s provisions passed into law, giving those they interacted with in CEP a sense for the look and feel of success. “Funding for more teachers of color, that’s an issue with a lot of support among Democrats,” Lee says. “But with Republicans in the majority, we thought it could be more effective for Democrats to stay in the back seat and have a Republican take the lead.”

For Thao, the experience was prima facie evidence that politics is like forming any other kind of social network. You need to reach out, make connections from connections, allow people of differing ex­periences and opinions to find expression, and learn to lean on one another when challenges arise. “We had so many mean­ingful conversations during the program, with legislative figures and within the cohort,” she says. “Going forward these will be relationships that I can rely on to keep my energy up when advocating, just knowing others care about your issue. The key will be to keep coming back.”

The leaders at Wilder are encouraged by the success stories that have already emerged from their pipeline. This past year in particular, Moran sensed that the group had bonded and found a sense of strength. “I think they learned that they have a lot of power in their own experiences and voices, maybe more so than they realized,” she says.

Another class began orientation on September 5, 2017, and Wilder believes that as one cohort follows another, long-term relationships will be forged, commitments will be deepened, and a lasting influence on Minnesota’s state capitol will result.

“The capitol is a small, tight-knit community, and a lot of the same folks are there year after year. We want our people to have that same kind of continuity,” Wilder’s Chang says. “I’ve been delighted by how quickly these cohort members came along and how much more they want to learn. We’re already looking forward to next year.”