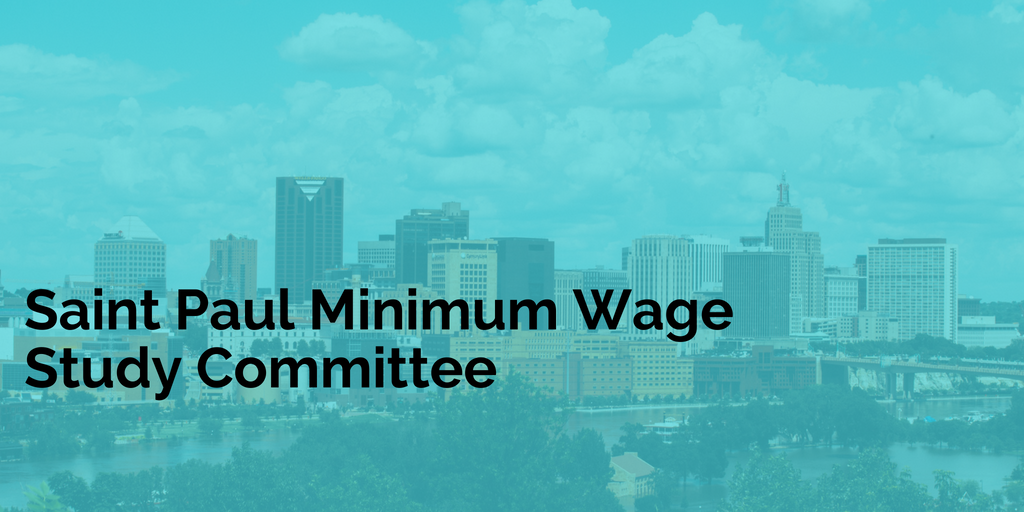 Recommendations are based on hours of deliberations and study from the 21 members of the committee, which represented a wide range of the Saint Paul community.

After 14 weeks of study from May to August 2018, the Citizens League’s Minimum Wage Study Committee has submitted recommendations to the City of Saint Paul as it considers a new municipal minimum wage ordinance.

At the end of the study, the committee agreed on forwarding three scenarios to the City of Saint Paul for consideration with percentages indicating the level of support each scenario found within the study committee. All three scenarios include a recommendation of a $15 per hour minimum wage indexed to inflation, as well as exemptions for City-approved youth training programs and disability employment programs. Two scenarios recommend no tip adjustment in the calculation of wages, while one includes a tip credit model that applies to full-service restaurants only with a probationary period and annual reevaluation for effectiveness by the City of Saint Paul. Phase-in time for the increase ranges from 6-7 years for small businesses, and 4-6 years for large businesses. Details on the scenarios can be found in the full report on the Citizens League’s website at citizensleague.org/minwage.

The committee, co-chaired by B Kyle, President & CEO of the Saint Paul Area Chamber of Commerce, and Rick Varco, Political Director of SEIU Healthcare MN, included 21 members representing a wide range of the Saint Paul community, from small, large, immigrant, and family owned business, to labor representatives from the healthcare, public, nonprofit, and trades sectors. There were hourly workers from restaurant chains, fine dining, and full service establishments, and restaurant owners experiencing the immediate effects of the increased minimum wage in Minneapolis.

“The Citizens League brought together a large group with very different ideas about how St. Paul should raise our minimum wage,” said Varco. “Over months of work, we looked at the facts and listened to different plans. I’m glad we were able to reach strong majorities on clear recommendations for the Council & Mayor.”

In fall of 2017, The Saint Paul Foundation commissioned the Citizens League to conduct a scoping project to identify key questions, resources, and stakeholders that would need to be part of a larger effort in 2018 to help inform a carefully planned municipal ordinance. The Citizens League published its Phase 1 Scoping Project report in February 2018 after consulting with over 200 members of the Saint Paul community, gathering qualitative data from individual interviews, group discussions/listening sessions, email submissions, and an anonymous online survey tool. The report provided insights on multiple issues and questions surrounding the minimum wage, assessed data and research availability, and identified key stakeholders whose voices should be included for credible development of a new ordinance. (The Phase 1 Scoping Report can be found on the Citizens League’s website at citizensleague.org/minwage.)

Based on the findings of the Phase 1 study, the City of Saint Paul developed a larger body of questions to be explored by an independent study committee that would bring Saint Paul residents, workers, and employers from a variety of backgrounds—and with a variety of political leanings and personal interests—together in one space. Once again, with additional support from The Saint Paul Foundation and the F.R. Bigelow Foundation, the City of Saint Paul commissioned the Citizens League to lead a Phase 2 Study Committee project.

In addition to weekly committee meetings, which were open for the public to observe, the Citizens League solicited input from community members on their project website, dedicated email and voicemail channels, and two public input sessions organized and facilitated by the City of Saint Paul. Input was recorded each week and presented to the Study Committee in the form of a Community Report, which was then given time for discussion among the committee members.

“The Citizens League really deserves the credit for facilitating the work on such a challenging topic.” said Kyle. “I know the City Council is taking this very seriously as well. I am grateful to have been a part of the process.”

The Citizens League has published the final report on its website at citizensleague.org/minwage.

About Citizens League: The Citizens League brings Minnesotans together across backgrounds, parties and ideologies to create and advance policy solutions. As a 66 year-old membership organization, we have led the development and implementation of Minnesota’s most innovative policy solutions from the Minnesota Miracle to charter schools. For more information, you can go to www.citizensleague.org.